We will be CLOSED during the Fall & Winter months, opening back up in Spring 2023. 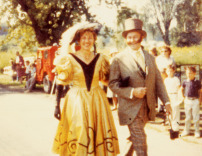 The formation of the Chadds Ford Historical Society in 1968 could not have been accomplished without the driving force of Virginia Peters Morgan, affectionately called "Pete.” A newcomer to Chadds Ford in the 1950’s, she quickly became an integral member of the village. She attended the first Chadds Ford Days in 1958, which started as a way to get the neighbors together in order to get to know one another better while sharing their interests in preserving the beauty and history of the countryside. Pete described the event this way: “The neighbors came in period dress. Chris Sanderson, as Town Crier, led them in a parade. They sang. They enjoyed the local country store and the local houses on back country roads readied for their visits with colonial decor. Howard Pyle and Wyeth family art was exhibited.” Chadds Ford Days later became a yearly event, held on the date nearest to the anniversary of the Battle of Brandywine, one of the key military engagements of the American Revolution. 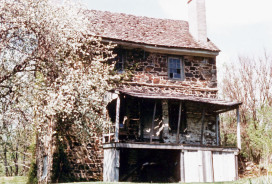 The next part of the story involves the John Chads House, a crumbling 18th century house on four acres, which came up for sale in 1967. A group of thirty neighbors assembled at the home of Pete Morgan to discuss ways to raise funds to purchase the historic building. As the first order of business, it was decided that a formal organization was needed to negotiate the purchase; the Chadds Ford Historical Society was incorporated on the 18th of July, 1968. Meanwhile, a frenzy of fundraising was undertaken to purchase the house and start restoration.

The vital job of restoring the Chads House was entrusted to John Milner and his firm of architects. As many period and original materials as possible were used: old brick in the chimneys, reproduction handmade cedar shakes on the roof, and old wood to fill in missing window frames. As the craftsmen did the physical labor, Pete, along with Arabella Cleveland and Betsy Wyeth, delved into deeds, wills, tax rolls, and road dockets to establish facts about the life and property of John Chads. An archaeological dig was held to retrieve relics around the house. This documentation helped to create the picture of life in eighteenth century Chadds Ford. 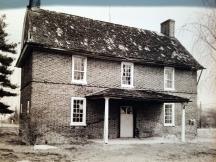 Soon after the decision was made to purchase the John Chads House, Society members learned that another historic building, the Barns-Brinton House, was scheduled to be torn down. Built in 1714 and used as a tavern by William Barns, it was later purchased by James Brinton and remained in the Brinton family for over one hundred years. Several generous donors and proceeds from Chadds Ford Days 1969 helped fund its purchase. Restoration was put on hold until the John Chads House was completed.

Both of the early 18th century structures have been restored as house museums by the nationally known restoration architect John Milner. They are maintained solely by the Chadds Ford Historical Society. Both were placed on the National Register of Historic Places in 1971 and are contributing elements of the Brandywine Battlefield National Historic Landmark.

By 1987 it was apparent that the Society had outgrown its office space in the cellar of the Barns-Brinton House and urgently needed a larger building to accommodate its growing activities. In 1991, with the capable leadership of George Franz and Dave Murtagh, the Barn Visitors Center was built to provide an office, meeting room, library, and museum display area. The Barn, designed to look like a colonial Pennsylvania bank barn with two additions, is built on the footprint of William Hoffman’s dairy barn. In keeping with the c. 1725 John Chads House and springhouse, the building’s façade is local fieldstone and frame so that it blends with its peers in the historic district.

Throughout the years the Society has added some new events in order to diversify funding. Although Chadds Ford Days remains the major fundraiser, Candlelight Christmas began in 1986; Pumpkin Carve, co-sponsored with Concordville-Chadds Ford Rotary, started in 1993. An Antique and Classic Car Show  was later included in Chadds Ford Days. All have been quite successful.

Although Pete Morgan died in 1991, her contribution to the Chadds Ford Historical Society and her determination to save what would become its historic buildings, the John Chads House, Springhouse, and the Barns-Brinton House, can still be felt today. Her spirit of volunteerism and total dedication that resulted in the formation of the Society live on today in many of its members and are influencing a new generation of history lovers.