The Battle of Brandywine 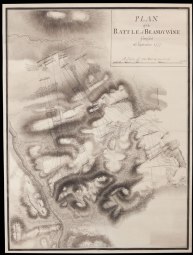 The Battle of Brandywine occurred on September 11, 1777 between Continental (American) forces under General George Washington and Crown (British) forces under General William Howe. The battle occurred in and around Chadds Ford, and lasted 11 hours - longer than any other battle during the American War for Independence (AWI). It also involved more troops than any other Revolutionary War battle with around 29,000 soldiers involved.

It was part of Howe's campaign to take Philadelphia, the capital of the American rebellion. The Continental forces lost at Brandywine and were ultimately unable to stop the British from taking Philadelphia. Taking the rebel capital failed to end the war as the British hoped, and the AWI continued for another six years.

To view an animated map of the Battle of Brandywine, click here.

In December 2013 the American Battlefield Protection Program (ABPP) and Chester County released the Brandywine Battlefield Protection Plan (BBPP) called "Revolution in the Peaceful Valley." This new study was created after a map was found in the Windsor Castle Archives in 2006, the "Windsor map." This previously unknown document was created by a British Sergeant in the days after the battle. Using this map along with the military battlefield mapping process known as KOCOA (Key terrain; Observation and Fields of fire; Cover and concealment; Avenues of approach and retreat), the first accurate representation of the battlefield ever was created. the signs that currently mark the battlefield landmark are from 1992 and are now obsolete. Please click on the Brandywine Battlefield Preservation Plan to learn more. 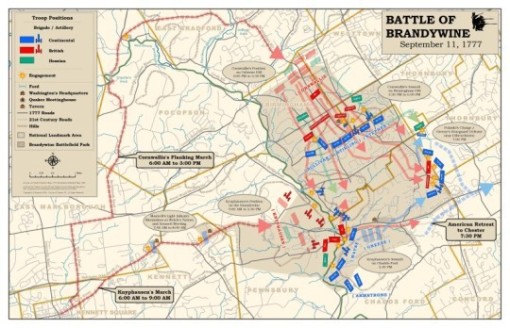 Please click on the following link to learn more about the Brandywine Battlefield Preservation Plan and the ongoing efforts to save this National Historic Treasure.